One item that Mr. Eddie DPH Sunny remembers most from his time at the Asrama Kerajaan Brunei Singapura (AKBS) is a large metal pot, 80 millimeters in diameter.

This pot was used to contain drinks for when it was time to break fast during the Muslim fasting month. For Mr. Sunny, who used to be a student from Brunei studying in Singapore, this pot is one of the first things he remembers when he reflects back on his time staying at the AKBS, now more commonly known as the Old Brunei Hostel.

“Fasting months were memorable, because of the rush to ‘book’, or reserve the tray with the biggest piece of chicken and also to fill your glass from the huge 80-millimeter metal pot, when it was time to break fast,” Mr. Sunny said. 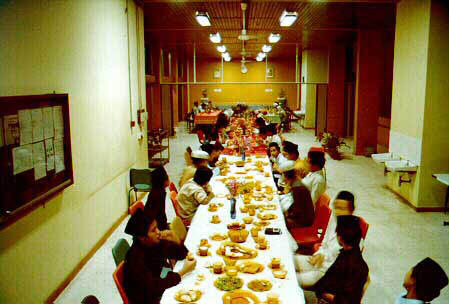 Residents sitting down to a meal at the hostel's dining hall. The frame hanging from the ceiling holds the folding door that separates the boys' section of the dining hall from the girls'. PHOTO: MR EDDIE DPH SUNNY

Mr. Sunny is now a government official at the Ministry of Development, Brunei Darussalam. He came to Singapore in 1975, and attended the Sang Nila Utama Secondary School, and later Hwa Chong Junior College. Throughout his time in Singapore, he stayed at the AKBS.

In our interview, Mr. Sunny easily recounts several events from his time at the hostel, and is able to describe them in vivid detail even after more than 30 years.

These memories range from playing soccer with friends at Ridley Park near the hostel, using Clorox on new jeans to achieve the “faded look” that was popular at that time, and visiting the night markets, known as pasar malams, that used to be set up along Orchard Road wearing pyjamas. 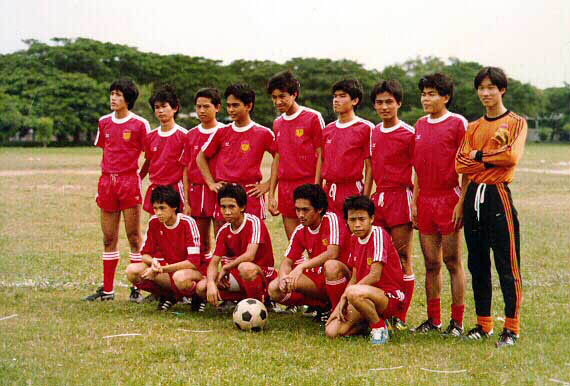 The hostel was a home away from home for about 200 Bruneian students, sent to study in Singapore by the Brunei government back when the education system in Brunei was not as developed.

A morning bell usually started a typical day at the hostel, and signaled that it was time for the students to awaken. After washing up and having breakfast, the younger students would then travel to their different schools on buses chartered by the Brunei government. The pre-university students would make their way to school on the public bus.

After lessons, students would then return to the hostel to complete their homework, followed by sports such as badminton and soccer. “This was for the ‘studious types’,” Mr. Sunny candidly pointed out. “The not-so-studious took every opportunity to play and have fun!”

The students occupied 24 rooms spread out across three floors, with five students to each room. Each student was given just a small cabinet to keep all their belongings. This was later upgraded to a built-in wardrobe.

The innovative students managed to use this cupboard for their entertainment too. “The top cabinet of the wardrobe makes a very good speaker box — we bought the speaker from Sungei Road, and since most of us were from the technical stream in school, attaching a speaker into the cabinet was a good chance for us to try out our woodworking skills.”

The implementation of a “house” system encouraged friendly competition among the students, who were separated into three different houses. They then competed against students from other houses in a championship.

Mr. Sunny was captain of the winning house for one year. “I’m not sure what was more memorable, winning the championship or convincing the officials to provide prizes for the top three winners for each sports event,” he said.

“And since there were only three houses, even if you lost everything you could still ‘win’ the third placing.” 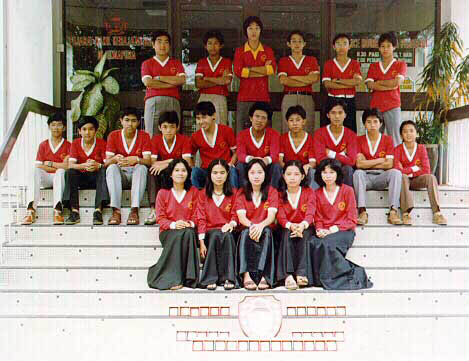 Mr Sunny (top row, third from left) and his house team with their winnings, in front of the Brunei Government Agency office located in the hostel. PHOTO: MR EDDIE DPH SUNNY

An extensive list provided by Mr. Sunny reveals that many of these precocious students are now high-ranking officials in the Brunei government, while others hold senior positions in multi-national companies such as Shell Petroleum Brunei. 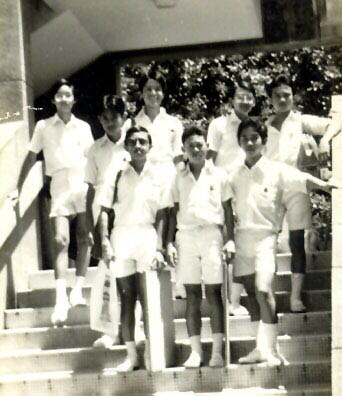 Mr. Sunny affirmed that the experience of staying at the AKBS certainly made him and the other students independent. “Not everyone was successful in passing their exams at that time, but I think most of us matured beyond our age at that time,” he said.

“But hostel life also shielded us from ‘real’ Singapore life,” he added. When we returned to the hostel, our ‘home’, we were among Bruneians. Even going to school was on a bus hired by our government.”

He also stressed the importance of the companionship of his hostel mates throughout his time in Singapore. “I think the common thread in all these memories is my friendship with the other students at the hostel,” he said.

“We did all these things together, and my memories are all of friends. Even if I can no longer remember their names, without them all these will be empty memories.”